You are here: Home > IKC An osteochondral scaffold that can repair large cartilage defects is due to go into its first clinical trials later this year. The technology has been backed from an early stage through the IKC’s partnership with the charity Versus Arthritis, which aims to accelerate technologies that could improve the lives of people with musculoskeletal conditions.

The IKC Versus Arthritis partnership has awarded nearly £2m funding to 22 projects, leading to the patenting of two technologies. The osteochondral scaffold, developed by Professor Chaozong Liu of UCL, is one of two technologies supported through the partnership that are undergoing regulatory approval, with another already in clinical trials.

The IKC has provided advice on preparations for the first in man trial of the scaffold, which is also funded by Versus Arthritis, and will take place at the Royal National Orthopaedic Hospital, in Stanmore, Middlesex. The trial will recruit 20 early-stage osteoarthritis or trauma patients who have damaged their cartilage or bone. The aim is to demonstrate that the device can be implanted safely, before moving to a larger scale clinical trial.

Professor Chaozong Liu (pictured), from UCL, who leads the project, had hoped to run the trial during 2021, but disruptions to the supply chain caused by the Covid pandemic delayed submission of the device to the Medicines and Healthcare Regulatory Agency (MHRA).

Professor Liu says: “Although the delays have been frustrating, we’re confident that we can gain MHRA approval in the next few months, and everything will then be in place to start the trial towards the end of 2022.”

The device uses materials manufactured in Italy and the USA, and is assembled in China by Shenzhen Lando Biomaterials Ltd, a spin out company from Tsinghua University. The partnership with the company was enabled by a £2m grant, awarded in 2016 from a fund jointly supported by Innovate UK and the Ministry of Science and Technology (MoST) in China to create scientific and translational collaborations. The funding also covered longer term animal studies and enabled the company to create a specialist facility in China to manufacture the device to established good manufacturing practices (GMP).

The early-stage funding provided by the IKC and Versus Arthritis enabled Professor Liu and his team to carry out the additional research needed to win the larger grants. This included initial in vitro evaluations which confirmed that cells grew into the scaffold and smaller scale animal studies which demonstrated that the scaffold promoted regrowth of cartilage and regeneration of the bone. IKC support and advice also helped Professor Liu in applications for follow on funding.

Dr Craig Bullock, Head of Discovery and Innovation at Versus Arthritis said: “Osteoarthritis affects millions of people making it the most common type of arthritis in the UK. Given the lack of effective treatment options, many people with severe osteoarthritis require joint replacement surgery. At Versus Arthritis, we never stop looking for better ways to treat osteoarthritis, and osteochondral scaffolds have the potential to treat the condition early and delay or completely remove the need for joint replacement surgery.

We’re delighted that this technology is now being moved towards first in-human clinical trials, a shining example of how innovative researchers working in collaboration with Versus Arthritis and the IKC can move research closer to helping people with arthritis.” 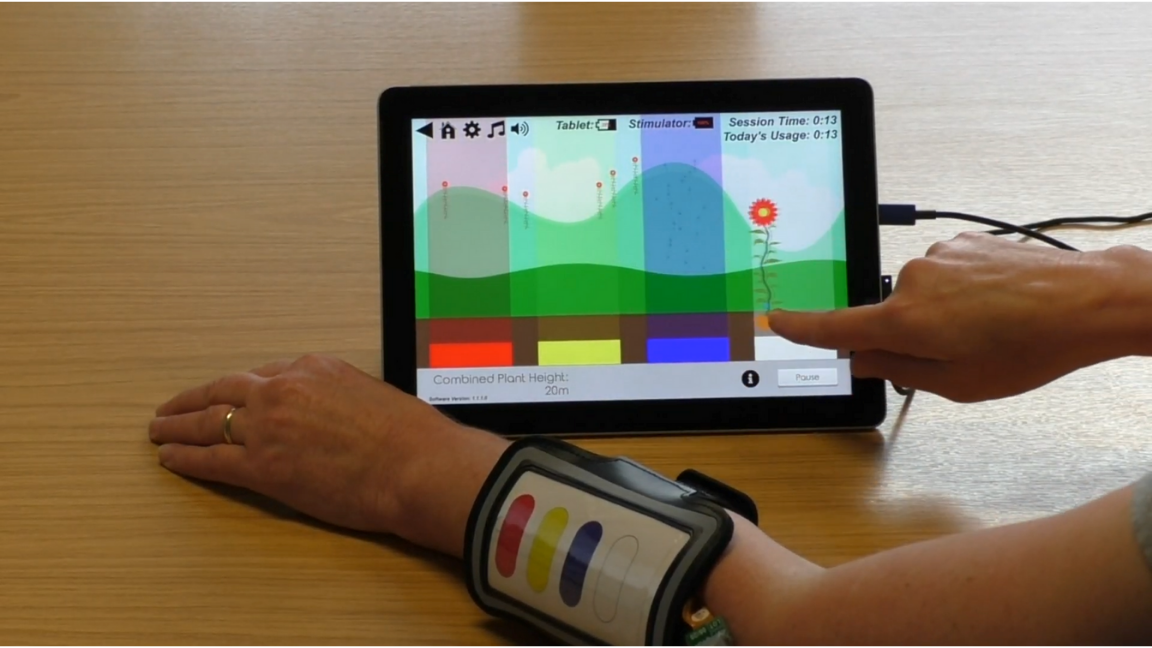 An innovative device to tackle chronic limb pain is being trialled across the UK, thanks to support from the IKC and Versus Arthritis.

The Sensory Training System aims to help patients regain a finer range of nerve sensation in their limbs, which they often lose due to constant, localised pain. While it may seem counter-intuitive, research has shown that if patients can retrain their brains to distinguish sensations in their limbs more clearly, their levels of pain will reduce.

The system involves four electrode pairs that patients wear on or close to their painful body part, as they play specially designed electronic games on a linked tablet device. The games ask them to correctly identify which electrodes are being lightly electrically stimulated as they move through a series of different scenarios. The tablet records information about the patients’ activities including time spent, levels reached, and accuracy.

The device was developed by Professor Candy McCabe, Professor of Clinical Research and Practice, at the University of the West of England and Dr Darren Hart, Principal Clinical Scientist at the Royal United Hospitals in Bath, in collaboration with colleagues at both organisations.

Increasing the range of sensations

Professor McCabe explains: “Over time, patients will have fewer neurons (nerve cells) representing these painful body parts ‘switched on’ in the brain because those neurons are effectively not having to work so hard – all they’re having to process is constant pain rather than subtle differences in sensation. If we can increase the range of the sensations that the limb and brain have to interpret, we believe that it will reduce the levels of pain for that patient.”

The games played aim to be interesting, but challenging. They include ‘Blockbuster’ where the patients need to correctly identify the active electrodes to explode falling blocks, and ‘Flower Tower’ where repeated success lets them grow flowers and plant a garden. All start off at an easy level, suitable for patients starting with poor sensory discrimination, where patients can more easily identify the electrodes that are spaced the furthest apart from each other. As each game progresses, patients must identify any one of four electrodes that are active in a random order, and at different distances from each other.
The researchers sought for and received MHRA approval for a clinical study using the redeveloped device.

Dr Darren Hart says: “We’ve tried to create an enjoyable and engaging experience for patients, to ensure they use the device for the necessary amount of time every day. Following feedback that the prototype games were repetitive and too easy, we’ve redesigned them with more levels of difficulty to keep people engaged. And now if they play the first two games for 15 minutes, it allows them to unlock a third game, so there’s also an incentive to keep at it!”

The trial – funded by Versus Arthritis in partnership with the IKC – hopes to collect information on 20 participants across the UK using the system daily for half an hour over four weeks. The level of pain patients are feeling will be assessed before and after the month to see if there has been an improvement. While it’s a small study, if the team can prove that patients can engage with the device for the length of time that is thought to provide therapeutic benefit, they will seek more funding for future trials and commercial product development. And with an estimated one-third of the UK population suffering from persistent pain, any future device will have broad application.

The additional support provided by the IKC has also proved valuable to the team. Professor McCabe says: “We’re a small clinical academic group – we have clinical expertise and research knowledge, but not the day-to-day expertise of how devices can be developed through to commercial production. The IKC have been extremely helpful, prompting us to constantly look forward and ask ourselves: where is this heading; who should be an industrial partner; and what are the pros and cons of different funding options?”

The technology is one of two supported by the IKC Versus Arthritis partnership to enter clinical trials. The £2m funding awarded through the partnership has supported 22 projects overall, leading to two technologies being patented and two undergoing regulatory approval.

Dr Craig Bullock, Head of Discovery and Innovation at Versus Arthritis said: “Persistent pain affects up to 28 million people in the UK. Pain can affect your ability to work, care for your family and live independently and we know current treatments options are not effective for many people living with persistent pain. We’re delighted with the progress made by Professor McCabe and the research team in developing a new and innovative non-drug based approach to tackle persistent pain. The funding from Versus Arthritis and the work of the IKC is accelerating this research forward towards helping people living with persistent pain sooner.” Dr Tom Baboolal’s career transition from academic research in cell biology to a clinical researcher position in industry was made possible through the IKC.

Now a Senior Clinical Research Scientist at Depuy Synthes, Tom’s route into industry was an unusual one. After a PhD in biochemistry and biophysics at Newcastle University he took a postdoctoral research position at the University of Leeds focusing on fairly fundamental biology, investigating bacterial then human protein structures and interactions.

Tom says: “Our lab was doing basic science research, and while I got some great publications from it, it was a long way from clinical application, which is where I ultimately wanted to be. I’ve always felt strongly that research should be used to benefit patients and was looking for ways to move towards a more translational role in industry, but I lacked the right skills and experience.”

When funding for his postdoctoral research project ended, a chance conversation together with Tom’s publication record and cell culture skills landed him a position in Professor Dennis McGonagle’s lab in the University of Leeds School of Medicine, where the team were investigating the potential therapeutic use of stem cells to repair cartilage. Working with surgeons to understand the practicalities of different surgical techniques led Tom to spot an opportunity to apply this research – and realise a childhood dream of inventing a medical device for clinical use.

Although the device was ultimately not taken forward, the process kickstarted by IKC proof of concept funding gave him invaluable knowledge and experience to move from academia into the job he now has with Depuy Synthes, which is part of the largest healthcare company in the world, Johnson & Johnson.

“Working on an IKC-funded project gave me the opportunity to gain a huge wealth of product development experience, something that postdocs rarely have the chance to do,” Tom recalls. “Supported by the IKC’s Technology Innovation Manager Graeme Howling and drawing on the extensive industry contacts of the IKC team, I had to become an independent project manager almost overnight.”

Tom supervised a student and developed skills to design his device and work on a prototype. He consulted with an engineering and sterilisation company, orthopaedic surgeons, met with patent and intellectual property experts and drew up a clinical trial protocol and an ethics application. In essence, Tom carried out exactly the kind of work that is done in industry, which he knew would stand him in good stead when the right job opportunity presented itself.

When the work on Tom’s device came to a close, the IKC team offered him a three-month secondment within their team. Tom jumped at the chance.

He says: “I knew this would be another good stepping stone, adding to my practical experience of the translation pathway. I helped review proof of concept funding applications, was part of the decision-making process and provided written feedback to both successful and unsuccessful applicants. It was interesting to review ideas that seemed great on paper, only to see that the market was too small, the IP landscape or regulatory pressures would be too challenging, or even that the idea simply wasn’t yet underpinned by enough published research.”

“Both the IKC project and the secondment cemented the conviction that my future lay not in academia, but as an industrial researcher. Alongside new skills, I now had the confidence to apply for my current position. My role is in strategic clinical research, working on new products and developing the strategy that gives us the clinical evidence to allow us to market devices all over the world. I’m a small cog in a big company, but it’s a vital role and contributes to enabling people to benefit from the latest technologies. It took a while, but I’m now where I’ve always wanted to be.”